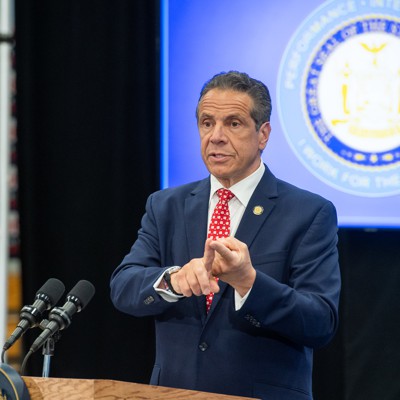 Gov. Andrew Cuomo stands to benefit from undermining public confidence in the investigation overseen by state Attorney General Letitia James. His political allies have alleged – without evidence – that she and a top investigator are more interested in scoring political points than finding the facts. The Cuomo administration has even brushed aside concerns that this amounts to tampering with an ongoing investigation just as the governor was getting ready to testify to investigators. “I have concerns as to the independence of the reviewers,” Cuomo added Monday.

Political allies are downplaying the importance and potential findings of ongoing investigations into an array of alleged misconduct overseen by the attorney general, FBI and state lawmakers. The embattled three-term governor meanwhile is leaning on challenges like COVID-19 and gun violence to project a sense of competence in extraordinary times.

His political problems began months ago when James released a scathing report on COVID-19 in nursing homes. Then came a fateful February meeting where Secretary to the Governor Melissa DeRosa seemingly admitted that the administration had withheld nursing home data from state lawmakers because of political considerations. A subsequent tsunami of bad news included allegations of sexual misconduct, self-enrichment, safety concerns at the Mario M. Cuomo Bridge, preferential COVID-19 tests for people close to the governor and a toxic work environment in the governor’s office.

The array of scandals have brought Cuomo down from the sky-high popularity he enjoyed earlier in the pandemic, but it remains to be seen whether it will drive him from office once the investigations conclude sometime in the coming months. He has said he is not going anywhere despite calls to resign from nearly every prominent Democrat in the state. Time could prove to be a key ally in his efforts to survive the complicated web of allegations against him. Here is a timeline of the key moments since his political troubles began nearly six months ago.

Feb. 10 – Top Cuomo aides meet with legislators. The administration releases long-awaited data on the number of nursing home residents who died of COVID-19 in hospitals following legal action and months of political pressure.

Feb. 11 – The New York Post reports Secretary to the Governor Melissa DeRosa admitted the administration hid that data out of fear of how then-President Donald Trump might use it.

Feb. 17 – Cuomo rants about Assembly Member Ron Kim during a conference call with reporters after Kim criticized the governor in the media. His administration releases a transcript of the Feb. 10 meeting with lawmakers.

Feb. 24 – Former Cuomo aide Lindsey Boylan publishes a Medium post detailing allegations of sexual harassment first made on Twitter in December. Cuomo skips regularly scheduled COVID-19 briefing as calls grow for an investigation into Boylan’s accusations. Karen Hinton details troubling pattern of “penis politics” with Cuomo dating back to his time as secretary of the federal Department of Housing and Urban Development.

Feb. 28 – Cuomo sort of apologizes to the former aides for what he says were comments misinterpreted as “unwanted flirtation” and provides a referral to James to conduct an investigation after initially trying to install a political ally to run the probe.

March 1 – A third woman, Anna Ruch, accuses Cuomo of sexual misconduct stemming from a 2019 encounter at the wedding of aide Gareth Rhodes.

March 3 – Cuomo tells reporters he will not resign and claims he “never touched anyone inappropriately.” Rhodes becomes the first high-profile staffer to announce his resignation amid growing scandals.

March 5 – State lawmakers pass legislation rolling back some of the governor’s emergency powers during the pandemic.

March 8 – Rep. Alexandria Ocasio-Cortez and other members of the state congressional delegation call on Cuomo to resign.

March 17 – Black leaders stick up for Cuomo at vaccine event in Harlem.

March 18 – Former Albany reporter Valerie Bauman outlines her own experience with troubling behavior by the governor.

March 22 – Federal Highway Administration announces it has “no safety concerns” about safety of the Mario M. Cuomo Bridge.

March 29 – Rochester-area woman Sherry Vill accuses the governor of improperly touching her during a 2017 visit to view flooding damage along Lake Ontario.

April 6 – Cuomo appears alongside Gary LaBarbera of the New York Building and Construction Trades Council and others at a press-free event in Manhattan.

April 7 – More details emerge about the alleged groping at Executive Mansion. Cuomo denies “intimate” knowledge of preferential COVID-19 tests given to family members. The state Legislature passes a new budget that includes numerous concessions to state legislators one week past the April 1 deadline.

April 14 – USA Today Network reports at least six top aides were extensively involved in helping the governor with his book.

April 19 – A Cuomo aide accuses James and state Comptroller Thomas DiNapoli of being unethical for pursuing an investigation into the Cuomo book deal. Cuomo claims staffers’ work on the book was voluntary. A poll shows Cuomo’s approval level with registered voters has hit a record low. Media reports show that the FBI is investigating whether Cuomo tried to shield political donors from liability during the pandemic.

April 20 – Stewart-Cousins holds a briefing with reporters but declines to criticize Cuomo for keeping public events closed to reporters.

April 22 – State Sen. Todd Kaminsky and Assembly Member Judy Griffin appear alongside Cuomo at a Long Island event despite their calls for him to resign.

April 26 – Cuomo holds the first in-person press conference since December where he denies at a Syracuse event that he sexually harassed aides and other accusations of wrongdoing. The state Senate Investigations Committee opens a probe into safety concerns at Mario M. Cuomo bridge.

April 27 – A Cuomo aide attacks a New York Post reporter over story alleging he said accusers “want attention.” Assembly Member Donna Lupardo, who has not called on Cuomo to resign, and local officials appear alongside Cuomo at an open-press event in Binghamton.

May 3 – Cuomo denies any wrongdoing at first in-person briefing in New York City since December.

May 10 – The governor declines to directly answer reporter questions at a New York City press conference on comments by his aide accusing James of allowing political motivations to taint her investigation into the governor. He also declines to say whether he has been interviewed by James, the FBI or Assembly members in their respective probes.

May 13 – Asked whether he recognized that his intent has no legal bearing on sexual harassment, Cuomo offers his own definition of the standard he signed into law.

May 17 – The governor releases a financial disclosure that reveals a $5.1 billion deal for his erstwhile best-selling book.

May 19 – The New York Times reveals that DeRosa’s father was among the people who received preferential COVID-19 tests early in the pandemic.

May 20 – It is “stupid” to ask whether he personally profited from the pandemic, Cuomo says at a Buffalo press conference alongside Mayor Byron Brown. The Washington Post reveals Cuomo bro Chris helped craft the administration’s response to scandals during strategy calls with gubernatorial staff.

May 24 – A Siena College poll finds his favorability rating has stabilized with registered voters. State Sen. John Brooks joins the ranks of elected officials willing to appear next to Cuomo in public.

May 27 – Cuomo gives reporters a tour of a train tunnel in Manhattan, the most extensive exposure to reporters since he resumed in-person press conferences weeks before.

June 8 –  The state Senate confirms both of Cuomo’s picks for the Court of Appeals, despite fairly significant opposition to former Nassau County District Attorney Madeline Singas.

June 11 –  Cuomo signs a bill that would provide the funding for the Assembly’s impeachment investigation into him.

June 15 – Cuomo holds a celebratory press conference, announcing that 70% of adults in the state have gotten at least one vaccine dose and that nearly COVID-19 restrictions have been lifted without taking questions from the press.

June 29 – A $10,000 per-plate fundraiser highlights a million dollars’ worth of ongoing support for the governor from labor and business leaders.

June 30 – Judiciary Committee announces it will use subpoena power in ongoing impeachment investigation.

July 15 – Financial disclosures show Cuomo getting outraised by a GOP rival for the first time since his 2006 campaign for attorney general.

July 17 – Cuomo testifies before investigators overseen by James. The governor would not appear in front of reporters until July 26.

July 21 – Assembly Member Charles Lavine tweets letter to governor warning of “severe repercussions” if aides continue criticizing James publicly. The administration defends Azzopardi’s comments, with DeRosa saying in a now-deleted Tweet that the Empire State is not the “People’s Republic of New York.”

July 23 – Heastie tells reporters that damaging findings by the attorney general would not necessarily be enough by itself to justify impeachment. The Department of Justice announces it will not open a civil investigation into COVID-19 deaths in nursing homes in New York and other states.