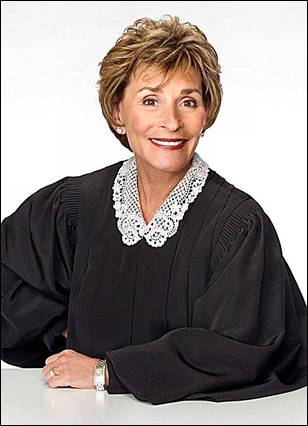 By a MetNews Staff Writer

The talent agency run by
the man who “discovered” former New York County (Manhattan) Family Court Judge
Judith Sheindlin and conceived the idea of the “Judge Judy” program was
properly denied redress in its action against CBS because the agency’s five
percent of the “proceeds” amounted to zero in light of the star’s $47
million-a-year salary which prevented profits in the final years, the Court of
Appeal for this district has held.

Justice Victoria Chaney of Div. One authored the opinion
affirming Los Angeles Superior Court Judge Rupert A. Byrdsong grant of summary
judgment in favor of a CBS subsidiary, Big Ticket Television, Inc., which
produced the series from its inception in 1996 until the conclusion of taping
this year, and CBS Studios, Inc. and CBS Corporation which distribute the show,
re-runs of which are being aired nationally. The opinion was filed Friday and
not certified for publication.

Plaintiff/appellant Rebel Entertainment Partners, Inc. was
contractually entitled to a cut of “defined proceeds” which were tied to “costs
of production,” an element of which was salaries. It insisted that CBS
unjustifiably defined as “salary” the entire sum paid to Sheindlin from 2010
on, rather than denominating some of the amount as a “participation share”
which would have minimized production costs and thus not precluded it from
receiving revenues.

It also challenged the reasonableness of paying Sheindlin the
amount it did. In 2010, when CBS agreed to double her wages to $45 million
(boosting that figure by $2 million three years later) television personalities David Letterman,
Jay Leno, and Conan O’Brien were pulling annual pay of $28 million or less.

As of the time the complaint was filed on March 14, 2016,
Rebel—whose president, Richard Lawrence, in 1995 successfully pitched the idea
to CBS of a courtroom show starring Sheindlin—had received no payments for six
years based on the lack of profits of “Judge Judy.”

The “cost of production” of “Judge Judy” is defined under the
contract between the agency and CBS as all expenditures by Big Ticket made “in
good faith, on a reasonable basis, and consistent with customary practice in
the United States television industry.”

Robinson opined that the $45 million a year salary that CBS
agreed in 2009 to pay as of the following year was “significantly in excess of
a reasonable salary and inconsistent with customary practice in the United
States television industry.”

“Defendants have…established that such salary is being paid
‘in good faith, on a reasonable basis, and consistent in the United States
television industry.’ There is no evidence presented that Judge Sheindlin’s
salary was negotiated in bad faith or is unreasonable. Judge Sheindlin has
re-negotiated her agreements to star in Judge Judy during the show’s
airing….Her present salary was the result of arms-length negotiation and Judge
Sheindlin’s final ‘take-it-or-leave-it offer.’…That Judge Scheindlin is paid
more than other television hosts does not establish her salary is unreasonable
or that Defendants’ negotiated the salary in bad faith.”

The plaintiff also contended that “Hot Bench,” a show created
by Sheindlin debuting Sept. 15, 2014 and still on the air, was a “Judge Judy”
spin-off, claiming entitlement to a share of the proceeds. O’Donnell found
there were triable issues of fact as to that matter, denying summary
adjudication.

O’Donnell retired from the bench on April 30, 2016; the case
was first bounced to Judge Yvette M. Palazuelos; it was then reassigned to
Byrdsong on Jan. 23, 2019. To facilitate an immediate appeal, the parties
stipulated that the cause of action relating to “Hot Bench” would be dismissed
and summary judgment entered on the two causes of action relating to profits
from “Judge Judy.”

In her opinion affirming the judgment, Chaney wrote:

“Rebel lost benefits under the agency agreement not because
of any action by CBS but because Sheindlin demanded a large salary, the
agreement provided that the salary of a performer constitutes a cost of
production, and the agreement further provided Rebel’s benefit would be reduced
by the costs of production.”

She noted Sheindlin’s testimony that she would give CBS an
ultimatum every three years: pay the salary she specified or lose her services.
Chaney said the testimony established three things:

With that much established, she said, the burden befell Rebel
“to demonstrate a triable issue as to whether CBS breached its contractual
obligation to make or incur direct out of pocket payments to Sheindlin in good
faith, on a reasonable basis, and consistent with customary practice,” and it
failed to do so.

Rebel asserted that CBS was at least obliged by virtue of its
duty of good faith sand fair dealing to seek assent by Sheindlin to receiving
part of her compensation in the form of a participation share. Chaney
responded:

“Assuming for the sake of argument that some form of
non-production compensation would have been as reliable as a salary, a matter
on which the record is silent, the undisputed evidence was that Sheindlin
brooked no counterproposals, but instead made demands on a take-it-or-leave-it
basis, saying, ‘This is not a negotiation.’ The only time she was presented
with a counterproposal, she rejected it unread. No principle or authority
obligated CBS to cajole Sheindlin into considering counterproposals.”

The case is Rebel
Entertainment v. Big Ticket Television,
B305862.

Representing Rebel on appeal were Bryan J. Freedman and Sean
M. Hardy of the Century City firm of Freedman + Taitelman, along with Robin
Meadow and Gary J. Wax of the appellate firm of Greines, Martin, Stein &
Richland.

James A. Curry and Daniel J. Friedman of Loeb & Loeb
acted for the CBS defendants.

“The fact that Richard Lawrence is complaining about my
salary is actually hilarious. I met Mr. Lawrence for 2 hours some 21 years ago.
Neither I nor anyone involved in the day-to-day production of my program has
heard from him in 20 years. Not a card, not a gift, not a flower, not a
congratulations. Yet he has somehow received over $17,000,000 from my program.
My rudimentary math translates that into $8,500,000 an hour for Mr. Lawrence.
Not a bad payday.”

“Now complaining about not getting enough money, that’s real
chutzpah! Since I have not spoken with Mr. Lawrence in over 20 years to suggest
that he had any involvement in my creating Hot Bench is equally laughable.”

“Judge Sheindlin, her producers and crew have worked for 20
years in producing a successful syndicated program. Lawrence has never been on
the set of the program in 20 years, nor has he had any communication with his
talent.”

A footnote in Chaney’s opinion says: “Neither Lawrence nor
Rebel was ever Sheindlin’s agent.” That fact formed the basis of a contention
by CBS, in opposing summary adjudication/judgment, that it was tricked, through
non-disclosure, into agreeing to a five percent slice of proceeds going to the
predecessor of Rebel.

CBS charged that Lawrence “intended to conceal the fact that
he did not actually represent Judge Sheindlin, and was motivated to conceal the
true nature of the extent of his representation of the project as a ‘package’
in order to extract an unjustified commission for ‘packaging services’ from Big
Ticket.”

That claim sparked Sheindlin’s own Los Angeles Superior
Court action against Lawrence and Rebel in which she claimed that Lawrence,
through Rebel’s predecessor, Abrarns Rubaloff & Lawrence, had raked in more
than $22 million from CBS by virtue of its false representation that it had
represented her, resulting in a drop in her proceeds. Los Angeles Superior Court
Judge Richard Burdge last Feb. 24 sustained a demurrer to Sheindlin’s
complaint, with leave to amend, proclaiming the pleading to be inadequate.

Sheindlin did not amend, saying in a press statement:

“[W]e decline to file an amended complaint as Mr. Lawrence
has insisted that I join Big Ticket (CBS) as a defendant.

“The court has declined to rule that CBS is not a necessary
party. Mr. Lawrence is the culprit in this fiasco of a packaging deal which has
netted him $22 million. CBS inherited this deal. I have been in business with
CBS for 20 years. I’m not suing them when they are not the wrongdoer. Sometimes
justice gets lost in the weeds of legalese gobbledygook. This is one of those
times. Sad.”

She broke with CBS, Sheindlin said in June, in part because
it put a priority on a talk show hosted by actress Drew Barrymore over “Hot
Bench.”

A new courtroom show featuring her, “Judy Justice,” is
scheduled to emerge next year.