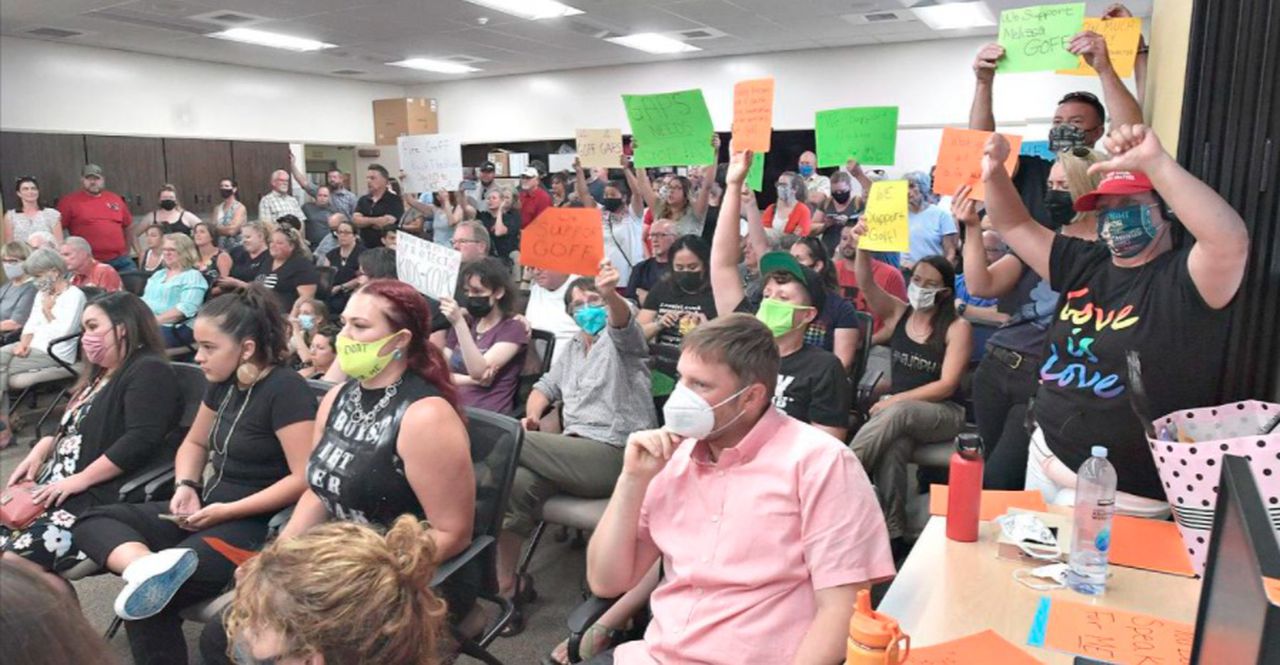 In mid-May, after a campaign fueled by unprecedented contributions from conservative Oregonians, voters in Albany elected three first-timers to the five-person school board.

The twists and turns that led to the 3-1 decision demonstrate how turbocharged national politics have seeped into local races, from Albany to Hillsboro. In some cases, hyper partisanship and polarization is having near-instantaneous effects in how Oregon school districts approach issues of equity.

Republican-stoked outrage over COVID-19 mitigation measures has played a huge role, as has critical race theory, an academic movement to re-examine history to better understand social inequities that exist today, such as how school boundaries were drawn decades ago to segregate schools after Brown vs. the Board of Education.

It’s not unique to Oregon.

In Florida, the Republican-led state board of education banned critical race theory in public classrooms, espousing critics’ frequent mischaracterization that it’s a distortion of historical facts to teach children that America is fundamentally racist. And this week, Gov. Ron DeSantis signed an executive order allowing parents there to ignore school mask mandates as the delta variant spreads throughout the country.

“As Republicans were winning the Oregon Legislature, there was an uptick in people running for school boards who were remnants of the old Moral Majority of the 1980s and 1990s,” he said. “These people would come in and say, ‘We want our tax dollars spent on X, Y and Z and not on sex ed.’ We’re seeing shades of that today.”

While critical race theory has been taught in colleges and universities for decades, no school at the elementary or secondary level teaches it, said Rita Kohli, an assistant professor of education at the University of California, Riverside.

Instead, she said, K-12 schools are increasingly focusing on the myriad ways racist policies of the past can explain today’s economic and academic inequities.

Yet opponents of critical race theory claim that providing white students that context is tantamount to shaming them.

“What we’re seeing,” Kohli said, “is a movement that’s trying to prevent us from having this literacy.”

Those campaigns are normally low-budget affairs with modest turnout, so five-figure contributions can have an outsized impact.

Data compiled by the Oregon School Boards Association shows that, for the last decade, most school board candidates ran unchallenged from 2005 until 2017.

In Albany, for instance, about 5,000 voters turned out for school board races on average from 2009 through 2015, an Oregonian/OregonLive analysis of Linn County elections data shows. Only two out of those 10 races featured more than one candidate in that time.

The average for the next three election cycles in the mid-sized city about 25 miles south of Salem? Nearly 7,700 voters on average turned out for eight contests, five of them three-way races. The other three races in that time were between two candidates.

An analysis of Washington County elections data showed a similar pattern emerged in Hillsboro, where voter turnout nearly doubled in 2017 and 2021 compared to 2019 and previous election cycles.

Candidates were tied by a laundry list of stances pushing for “sensible” schools and “common sense” education policy.

“School boards are becoming increasingly important to the state’s political landscape,” Oregon Right to Life told its supporters in a campaign flyer this year, explaining its unprecedented involvement in school board races in 2021.

Getting favored conservative candidates elected to the relatively low-profile political roles “is crucial,” as some of them “will seek higher office,” the flyer continued.

Three newcomers to the Albany board who voted to fire Goff — Roger Nyquist, Brad Wilson and Pete Morse — ran as a slate backed by a new political action committee.

Albany First dumped about $24,000 into the district’s school board races using money from, among others, corporate battery parts manufacturer Entek and the political arm of the city’s chamber of commerce. The committee cut $4,500 checks to Wilson’s and Morse’s campaigns.

Oregon Right to Life, a conservative group that opposes abortions, spent nearly $379,000 in contests across the state.

The organization sank nearly $20,000 this year into a campaign to elect Salem-Keizer candidate Kari Zohner, who came under fire in April for calling George Floyd a “criminal” in a since-deleted Facebook comment. Voters ultimately rejected Zohner and elected Osvaldo F. Avila.

A similar organization, Communities for Sensible Schools, ran four candidates on a slate in Hillsboro and spent nearly $120,000 this year.

Its single largest donor was Bart Rask, a local orthopedic surgeon who gave the committee $30,000. The rest of its money came from individuals who gave anywhere from $200 to $5,000.

Only one of the committee’s candidates won.

“The culture wars definitely have an impact,” she said.

Lopez, who won reelection in May, heard from constituents who expressed frustration at how slowly progressive policies — from police reform to immigration policy — evolved on the state and national level after Floyd’s murder and President Donald Trump’s defeat.

Congress is consistently gridlocked and Oregon’s Legislature meets for only about five months every other year and a month in even-numbered years.

“On the school board level,” Lopez said, “the things they enact or vote on on a Tuesday night get implemented the following month. Those impacts are seen and heard more readily.”

But politics is a pendulum. And four years ago, Lopez swung into campaign mode because of 2016′s contentious presidential election.

Trump’s disparaging remarks as a candidate about Mexican immigrants were upsetting enough, she said. When her son came home from school and told Lopez he heard Trump planned to deport families like hers, Lopez decided to run for public office.

“I was really just taken aback by this feeling that he should only be worried about schoolwork,” she said.

Lopez was also inspired by the previous all-male board’s discussions about sex education and its controversial vote to strip Hillsboro schools of health centers where girls could obtain contraception. In 2018, Lopez and her fellow board members reversed the latter.

“There was an intersection there,” Lopez said. “It was definitely a big concern about our community at large.”

While women of color launched school board campaigns in large part to ensure district leadership better reflected student demographics, conservative activists have sought to reverse policies shaped by those constituencies.

In 2021, COVID-19 measures served to motivate voters in elections that typically draw a low turnout and boost right-wing pet causes that would have otherwise been nonstarters, Moore said.

“Given the centrality of COVID in peoples’ personal lives, if opening the schools was one of your major issues, you were going to turn in your ballot,” he said.

The candidates who ran against Lopez and her fellow Hillsboro board members promoted more parental involvement in education “to respect a range of family and cultural values.”

They also pushed for schools to focus on “core content,” notably leaving out issues of equity in a year dominated by conversations over racial justice.

As the state pulled back its role in issuing coronavirus rules for schools, Lopez noticed more emails in her inbox criticizing the idea of equity in schools. In the lead up to Election Day, a three-word phrase became increasingly common: critical race theory.

The topic is prevalent among right-wing media.

Media Matters For America, a liberal media watchdog group, counted 1,300 mentions of critical race theory on Fox News from early March to mid-June. The organization’s analysis concluded that 11 of the network’s most prominent critics of the practice as either professional Republican campaign strategists or well-connected politicos.

Moore says Oregonians have increasingly turned to national news and opinion hosts on television and social media for information as local newspapers cut staff over the last 20 years and pulled back on deeply reporting most races.

To Kohli, the education assistant professor, the trend looks much like a backlash to the racial justice protests that captured the nation’s attention — and lasted for more than 100 consecutive nights in Portland — after a police officer murdered Floyd in Minneapolis.

When school districts pour resources into Black, Indigenous and other students of color, she said, white parents may sometimes see that as their children losing something.

When Goff was hired as Albany’s superintendent in 2019, her first move in the district of about 9,000 students was to meet with Black and Latino families.

“Melissa reached out to those communities, did forums with them, created positions among them,” Michael Thomson, the lone school board member to vote against her firing, told The Oregonian/OregonLive.

Goff said families spoke at length about the harassment they encountered in school and in the community.

“What came out loud and clear is that there’s racism in our school district and in our community,” she told The Oregonian/OregonLive. “The predominant theme was this bullying and harassment related to being different.”

Among Goff’s most controversial moves was her push to standardize the schedules in Albany’s two high schools, a conversation district officials embarked on prior to her tenure.

Students at South Albany High, which has more low-income and minority students than the district as a whole, currently take seven periods per term on a modified block schedule. Across town at West Albany, which is whiter and more affluent than district averages, high schoolers take eight classes per term.

Goff’s administration planned to adopt a seven-period schedule for both schools next year, allowing students to take some classes on either campus and cutting down on duplicate course offerings.

She billed it as an issue of access and equity, increasing the variety of classes and electives offered at South Albany.

Parents and some students cried foul over the schedule change, most of them from West Albany, Goff said. She believes games of telephone over social media played a part in spreading misinformation and heightened tensions over the plan.

“I think that’s a very typical pattern when it comes to issues of race and equity,” Goff said. “These diversions are set up, these half-truths, are set up to be truly damaging to whoever is in power.”

Rob Saxton, the incoming interim superintendent who retired as Oregon’s state schools chief in 2015, told the Albany school board in his interview that he would not change the high school schedules in the coming year.

Saxton also hired a retired district human resources director as his chief of staff to oversee the administration Goff hired, which is predominantly women and people of color. Both Saxton and his deputy, Rich Sipes, are white men.

“If there’s a commitment to equity from this board, they’re really not showing it out of the gate,” Goff told The Oregonian/OregonLive.

Thomson says that even though his fellow board members won’t publicly explain their decision to oust Goff, some students and families are feeling the ripple effects of their sudden dismissal of a superintendent who pushed for equity.

“What are kids of color supposed to think?” Thomson said.

Nyquist, who is also a Linn County commissioner, pointed to an editorial from the Albany Democrat-Herald newspaper that criticized Goff as an ineffective communicator. But he told The Oregonian/OregonLive he would not comment further because “it’s a personnel matter.”

The Albany newspaper’s editorial board has also demanded Nyquist, Morse and Wilson explain their reasoning for voting to fire Goff.

Over the next few years, Moore expects extreme rhetoric over state and national climate policy to seep into lower profile races. He pointed to the worsening droughts, wildfire seasons and tensions over irrigation channels in southern Oregon.

“We’re going to start seeing it in more and more places,” he said.

Eder is The Oregonian’s education reporter. Do you have a tip about Portland Public Schools? Email [email protected].