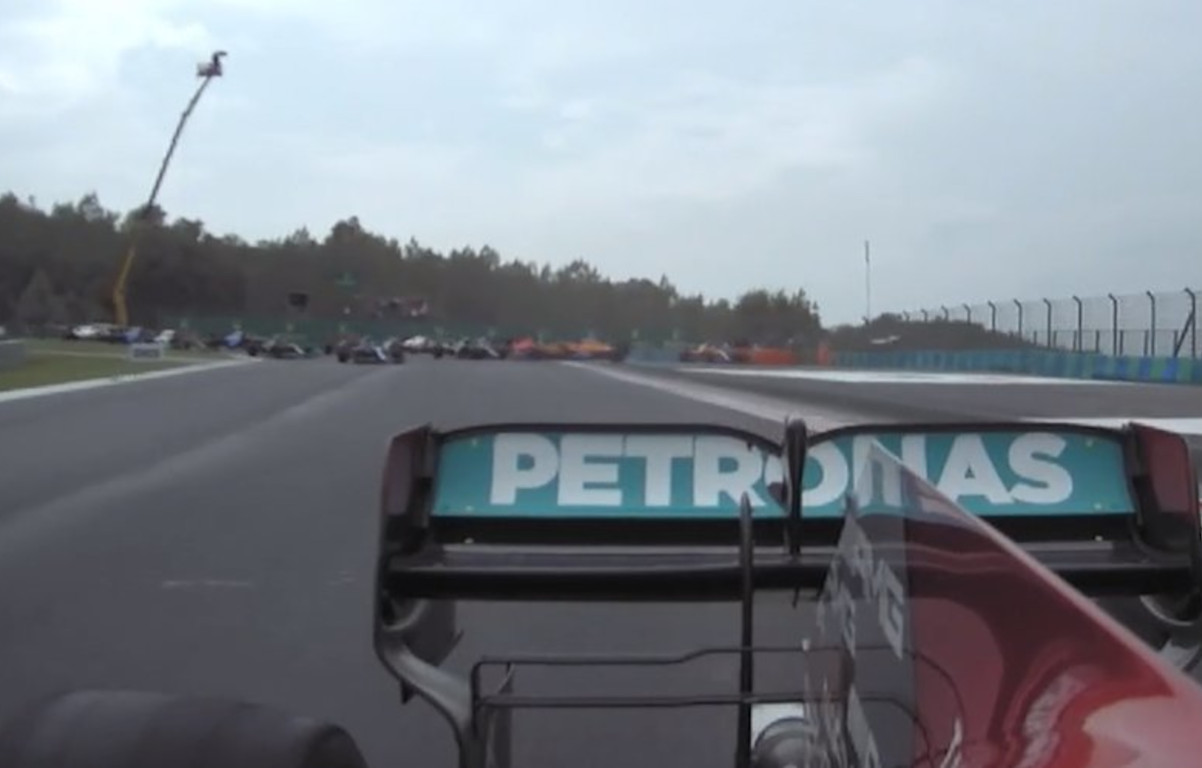 Esteban Ocon pulled off a shock win at a riveting Hungarian GP, Sebastian Vettel provisionally second due to a post-race fuel violation after Valtteri Bottas’ Turn 1 antics caused carnage and set the scene.

Bottas’ mistake on a wet track into Turn 1 appeared to set up Lewis Hamilton for the win only for the Brit to stay out on track to take the restart grid while the rest of the field all pitted for slicks.

With his title rival Max Verstappen outside the points after his RB16B was damaged by Bottas’ Turn 1 adventures, the race for the title protagonists are all about who could claw back the most positions, and points.

Hamilton recovered from his pole position part two to finish third, Verstappen was P9, the Mercedes driver retaking the lead in the Drivers’ Championship.

With the winners of nine of this year’s 10 races out of the running for the Hungarian win, Formula 1 crowned a brand new race winner with Ocon holding off Vettel to take his maiden race win.

BREAKING: @OconEsteban is a Formula 1 race winner for the first time!

He finishes ahead of Sebastian Vettel (P2) and Lewis Hamilton (P3) after a thrilling and dramatic race in Hungary 🏆#HungarianGP 🇭🇺 #F1 pic.twitter.com/AGT2s3mWCO

Murphy’s law, ahead of a grand prix in which the title protagonists would definitely be on a different strategies having qualified on different tyres, the rain arrived in build up to negate that.

Instead all 20 drivers started on the intermediates, Hamilton from pole position ahead of Bottas and Verstappen, the latter’s RB16B fitted with a new PU after Honda found a crack in the transition from the engine to the gearbox. Antonio Giovinazzi was the only driver on the formation lap to swing into the pits for medium slicks.

Hamilton made a great start ahead of Verstappen while Bottas got bogged down. Norris tried to make the most of that and pass the Mercedes, Bottas rear-ended Norris under-braking and Norris hit Verstappen, pushing the Red Bull off the track. Bottas then hit Sergio Perez with Lance Stroll and Charles Leclerc also caught up. The Safety Car was deployed.

Hamilton led ahead of Ocon and Vettel while Perez, Stroll, Leclerc and Bottas all retired. Verstappen down in P13. The race was red flagged, a chance for Red Bull to patch up Verstappen’s bargeboard, the team saying the right side was gone. Norris’ McLaren was retired, ending his 15-race points-scoring streak.

The race resumed on a dry circuit with George Russell telling Williams that “at this rate everyone is going to box”. But no, not every did, with Hamilton the sole driver staying out to take start on the inters.

Russell and Ocon were the fastest in the pits and led the rest out of the pits on slicks. Hamilton was past Turn 1 before the rest joined the race with Ocon up into the lead as Russell was instructed by the stewards to give back the positions he gained in the pit lane.

Hamilton pitted after 1 lap for slicks, coming out P14, three places behind Verstappen, and last of the 14 runners still in the race as Nikita Mazepin added his name to the ever-growing DNF list. His Haas suffered damage, hit by Kimi Raikkonen in the pits.

At the front of the race Ocon led Vettel by 1.5s with Nicholas Latifi nine second behind but holding onto third place while at the back Mick Schumacher held up Verstappen and Hamilton overtook Giovinazzi for 13th, the latter then handed a 10 second stop-go penalty for speeding in the pit lane. Alfa Romeo’s day went from bad to worse with Raikkonen hit with a penalty for his pit lane antics, 10 seconds.

Verstappen finally passed Schumacher on lap 14, taking P10 after an intense battle where the Haas was not willing to give up on his point. Schumacher got a bit of a whack for his efforts. Hamilton made short work against the Haas when it was his turn to pass.

📻: “Not bad with only half a car.” 😉 #HungarianGP 🇭🇺 pic.twitter.com/WAXxcYdw3f

With pit stops in play Hamilton stopped on lap 20, swapping his mediums for fresh hard tyres. P11 to last again. Verstappen stopped a lap later, also going with the hard Pirellis. He came behind Hamilton who was even ahead of Daniel Ricciardo such was the power of the undercut.

Back at the front Carlos Sainz ran third after Latifi’s pit stop and refused Ferrari’s call to come in. At two seconds per lap faster than Ocon and Vettel, he began to eat into their lead. Fernando Alonso sticking close to the Ferrari.

Sainz was the first of the four to stop, coming out P4. Vettel stopped lap 37 from second, 3.3s with a small problem on the left rear, he came out P3, six seconds ahead of Sainz and Hamilton, the Brit up to P5 after passing Yuki Tsunoda. Ocon was in the lap after Vettel, 2.3s, to put him out ahead of Vettel.

Alonso was leading but briefly as he then came into the pits. Lap 40 of 70 and it was again Ocon leading ahead of Vettel and Sainz but Hamilton had jumped Alonso for fourth. Verstappen, running outside the points, pitted for new medium tyres. Hamilton’s tyres got a “second wind” – and three laps he pitted for new mediums. He came out P5 behind Alonso.

Vettel made his first proper attempt at passing Ocon on lap 49, handed a look by the backmarker that was Raikkonen. Ocon did well to hold onto the lead, Sainz running third and Alonso fourth but with Hamilton on his fresh tyres closing fast.

He caught Alonso on lap 54, the two bouncing off each other as Hamilton tried to make the move at Turn 4 but had to back off. Three laps later Alonso again came out on top of the battle, all the while helping Ocon by keeping Hamilton behind him. Alonso did the same six laps later as again Hamilton attacked, the Spaniard defended. And then a lock up from Alonso handed Hamilton P4. A lap later he took third off Sainz but the battle with Alonso meant he did not have the time to chase down the top two.

Two of the greatest of all time, wheel-to-wheel, lap-after-lap

Hamilton FINALLY gets past Alonso for P4!#HungarianGP 🇭🇺 #F1 pic.twitter.com/v7roMkI0je

Ocon raced to the victory, standing firm against pressure from Vettel, to claim his maiden grand prix win by just under two seconds. “Yessss!! Whoooo!!!! Yes guys!!!” says a jubilant Ocon. It was Vettel’s second podium with Aston Martin, Hamilton a second behind the German.

Sainz was fourth ahead of Alonso, Pierre Gasly, who snatched the fastest lap point off Hamilton on the final lap, and Tsunoda. Verstappen scored one point with his P10. He finished behind the Williams team-mates of Latifi and Russell. Yes, Williams scored points!

Hours after the race, Sebastian Vettel was stripped of his P2 finish at the Hungarian Grand Prix for not having one litre of fuel remaining at the end.

But, Vettel was then provisionally reinstated back to P2 as Aston Martin has stated their intention to appeal the decision, saying there is a legal amount of fuel left in the car.